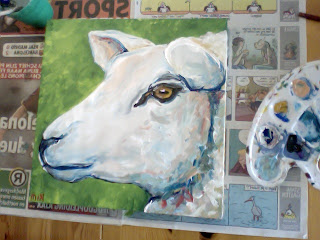 Used again a 30x30cm canvas, last time i really lied the technique, so I decided to go on with it!
I want to make a whole new series of this kind of technique :) I like the number of colors used in the painting. ( painting is mirrored by my mac!! )

Didn't know how a sheepshead looked like, so I needed to find a side view of a sheep.
and used a bit of my own imagination so I put another ear on it, otherwise the painting would be dull.

When the background dried up, I started with the big lines like the contour of the head and the upper ear.
then madde the nose ( which wasn't that handy because I'm right handed so I had to be careful with the other side ) 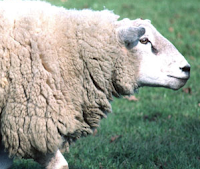 I think the neck has like three layers because i couldn't agree with the color palette haha! But now it's not  tooooo colorful as before, it was way to red, so it looked like a dead one.. hmm not good! but now it's more appropriate I think.